The start of Andy’s professional career came at Widnes, and a week after joining, he was off to Wembley with his new teammates – as a spectator. During his first season 1979/1980, he wasn’t given the opportunity and was forced to develop his game in the reserves, suffering a broken wrist in the process. If that wasn’t bad enough they signed Johnny Taylor from Leigh, ahead of Andy to add to his woes. The young Andy defiantly handed in a transfer request, but Doug Laughton stood firm.

Andy had to wait until December 9th, on a cold Tuesday evening at Naugton Park, before he got his change to play. Sent on from the bench at half-time, ‘number 14’ Andy made an immediate impact, setting up three tries and scoring one himself in the John Player Trophy match with Widnes winning 25-0. Doug said absolutely nothing, but in that game, Andy Gregory was finally established as a first team professional. At the end of the 1980/1981 season, Widnes would face Hull Kingston Rovers in the Challenge Cup final. The final score was 18-9 to Widnes. He would go on to appear in two more Challenge Cup Finals at Wembley for Widnes; in 1982 against Hull and 1984 with Wigan.

After earning a place in the Great Britain Tour of Australia of 1984 he was by now regarded as the best scrum half in the country. Thoroughly disillusioned with Widnes, who had failed to offer Andy a new contract, he needed a new challenge; Warrington.

In pure Gregory fashion his first performance for Warrington earned him man of the match. “His signing was a major coup for then-Chairman Peter Higham,” said Cullen, who added, “I’ve never known a player with so much confidence and self-belief, or a scrum-half with Andy’s calibre. You no longer see it in the modern game.”

While many people associate him with Wigan, every die-hard Warrington fan will tell you that during his 1984-1987 Wilderspool tenure, Andy Gregory won Warrington Player of the Year and helped the team lift The Premiership Trophy against Halifax. As Paul Cullen noted, “It was a massive boost” when Andy signed for the club.

Many Warrington fans can recall Andy Gregory’s outstanding contribution to matches, like the 1985 game against Leeds where a single-handed Gregory The Great display destroyed the opposition. Warrington scored nine tries during the game with Andy making eight of them and adding one himself to complete the masterclass.

Andy will always also be remembered at Warrington for his personal contribution in the 1986 Premiership Trophy Final when they crushed First Division Champions Halifax 38-10 at Elland Road.

As the 1986/1987 season progressed Saints and Wigan chased The Pocket Battleship relentlessly and when the time came to hand in a transfer request, all he could find was a beer mat from the club bar to put it on. “It was ‘bitter’ end,” said Andy, smiling!

By 1986/1987 Wigan had long returned to the Championship and under Graham Lowe’s stewardship, won 29-games in row. A major part of this success was down to the world-record signing of Andy Gregory for £130,000 – better late than never, Wigan had welcomed home their most famous number 7 to don the shirt.

During Andy’s first season Wigan went on to win the league, securing the title at Halifax with Andy dummying practically everyone on the pitch, including half of his team mates, the ref and touch judge to score possibly the finest try of his illustrious career.

In the October of 1987, the World Club Challenge came to Central Park. Andy remembers walking out to the sound of fireworks, “They were going off everywhere. We couldn’t see each other and just stood still coughing till the smoke cleared.”

The two sides knocked seven bells out of each other with ‘Greg’ in the thick of it. “The atmosphere was electric. It will stay with me forever,” said a victorious Andy, after holding the cup aloft in an intense 8-2 victory over Australia’s Manly-Warringah.

The 1987/1988 season was a defining moment in Andy’s career. Yes, he’d been to Wembley and had a trophy cabinet full of medals, but never with his boyhood team. It was the era of Gregory, Edwards, Hanley et al and the start of what would turn out to be the golden years in Wigan’s history to-date.

The 1988 final was probably one of the best finals that Andy has ever played in. Every Wigan move went to plan and the team would have beaten any side in the world on that day. The game ended Wigan 32, Halifax 12, with Gregory adding to the tally with a drop goal. His outstanding performance helped Wigan win the Challenge Cup and, in recognition for his own display, Andy was awarded The Lance Todd Trophy.

At the end of the 88/89 season Wigan faced St Helens at Wembley in the Challenge Cup Final with The Saints team strengthened by Manly-Warringah’s Michael O’Connor and Paul Vautin. Alex Murphy’s side had already beaten Wigan six-days before the final at Central Park so there was everything to play for.

Andy and Sean Edwards controlled the centre of the pitch that day, Andy contributing with a drop goal and a try of his own. The game the ended with Wigan romping to a 27-0 victory – the first time since 1951 that one team failed to score in the final, and never repeated again till 2013. Andy had added yet another winners’ medal to add to the mounting collection.

In 1990, at 28 years of age, Andy was the undisputed, finest scrum-half in the world before stepping out at Wembley for Wigan in a match he completely dominated. Defeating Warrington 36-14, again he raised the Challenge Cup and ran away with the second Lance Todd Trophy of his career.

The 1991 season culminated in Andy travelling to the North Circular Road in London, walking out for his seventh appearance in a Challenge Cup Final, against long-standing adversaries St Helens.

This time Andy walked out into the frenzy of the Cup Final atmosphere, 29-year’s old and most importantly, he was now the most experienced finalist on the pitch. Frano Botica ripped The Saints to shreds alongside a blood-stained Andy Gregory, drop kicking Wigan into a 13-0 lead. Despite coming back strongly and down to 12-men, St Helens couldn’t quite recover, losing out to a their triumphant neighbours, final score 13-8.

At the end of 1992 Andy was well versed in being targeted by the opposition, this time with Lee Crooks going in for a crunching tackle to effectively hamper Andy’s chances of a third Lance Todd Trophy. It was to be his last Challenge Cup Final appearance, at the end of an era with Wigan but invincible Wigan trounced Castleford 28-12, with Gregory going on to collect the Cup Winners’ medal. Talk about going out in style!

When Andy returned from the 92 Australia Tour with Great Britain, Maurice Lindsay had already departed Central Park for the RFL and with Andy previously promised a new Wigan contract – it should have been as simple as saying ‘Jack Robinson’. Well, that was the plan, but with Gregory picking up injuries down under and being forced to play, Jack Robinson reneged on the deal and decided that he’d try to cut Andy’s wages at the same time.

A cocksure Robinson uttered the words, “You’re a Wigan lad, and you’ll never leave this club.” Anyone who knows Andy Gregory wouldn’t need to guess his reaction. That was it. Andy left behind his halcyon years in an instant, and the promise of an appearance on BBC’s This is Your Life, to drive across the Pennines to team up again with Doug Laughton at Leeds.

However, it was Andy’s love for the North West and his daily commute across the M62 which eventually forced him to realise that after 27 games, he wanted to play for a side nearer home.

Given Andy’s first taste of professional rugby was at Salford, home of The Lance Todd Trophy, it was perhaps inevitable that he would return there to end his playing days. Back in the North West and still suffering from injuries sustained throughout a gruelling career, Andy felt settled again and managed to achieve several man of the match performances at Salford.

However brilliant Andy was throughout his playing career, like all professionals Andy decided enough was enough following a 48-20 victory over Huddersfield. That Friday night, 17th September 1995, at age-34 and after half a lifetime spent playing the professional game, Andy hung up his boots for the last time. 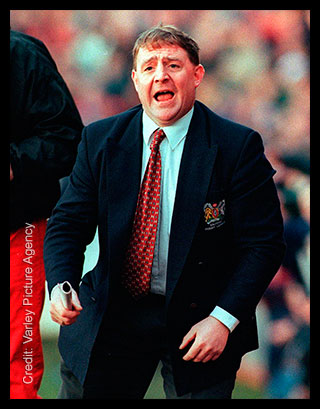 In early 1995, Andy was called upon to take over the helm with Salford, already having failed to win 17 out of the first 25 matches of the season. Gregory had an immediate impact, turning around the club’s fortunes, winning half of the remaining games to pull Salford six points clear of Hull in the relegation zone.

Unfortunately for Salford, Tycoon Rupert Murdoch’s funded Super League was introduced for the following season meaning that the club would now have to play second-tier rugby league. After spending a lifetime playing at the top level of the game, Andy’s first full season in charge would see him visiting Whitehaven rather than Wembley.

Instantly Andy knew that he needed to inject his winning mentality into a side that was playing to small crowds in settings far removed from the new glittering Super League. Andy craved the big stage and most of all, he wanted to take Salford to where he thought they belonged.

By the end of the season Andy’s new-look Salford has demolished the competition and reached the pinnacle of the league, beating Keighley Cougars to claim the league title. For inexplicable reasons Salford were denied promotion to the Super League and again Andy would be faced with yet another season of lower league rugby.

During this period in Feb 96, Andy Gregory’s team faced the undefeatable Wigan at the Willows in the Challenge Cup on TV. At this time Wigan had won every final for the past 8-years and the Salford game was merely a formality. But Greg himself was undefeated at Wembley in 8-Challenge Cup finals and on the night Andy’s Salford despatched Wigan 26-16. Gregory had made his name as a successful coach and Salford went on to defeat Keighley Cougars for the second time to win the league title after a 21-4 win at Old Trafford. Salford were finally promoted to Super League status.

Now back in familiar surroundings, Andy kicked off the 1997 Super League season with a double victory against Wigan, defeating St Helens and Paris St Germain. Andy’s side won 12 games, ending the season in a remarkable sixth place. The highlight of the season came when Adelaide Rams came to The Willows, with Salford emerging as 14–12 winners. Andy was on the road to Wembley again, reaching the semi finals of the Challenge Cup, where a star studded St Helens side eventually overcame The Reds.

This was the year that Andy was invited to coach Great Britain Nines for the Twelve Nation World Cup in Australia, taking John Wilkinson with him as Tour Manager. Working together they reached the semi finals.

Andy had done everything he set out to do for Salford and he decided that it was time to say farewell to a career in coaching in 1999, briefly returning to the game in 2007 as a favour for John Chadwick at Blackpool Panthers. At club level Andy Gregory will always be regarded by Widnes, Warrington, Wigan, Leeds and Salford fans as one of their heroes, a true legend of the game.